BARO attempts to change perceptions of people towards the indigenous art from various parts of India by presenting it as “cool”, contemporary and really great to live with. By showcasing it in our environment, people immediately view the most traditional art forms as incredible things of beauty that add value to any space.

While doing this, we preserve our belief in working equitably with the larger community around us and including them all in our journey to make all spaces unique, comfortable and attractive.

The art comes from artists we know one-on-one, who trust us with their work and who are all delighted with the new perspective we have added to their age-old legacy. We do not take any commission from the artists but encourage them to keep prices reasonable so that more people are able to enjoy what they do in their own private spaces. Most of them will take special commissions.

The Gonds are the largest Adivasi Community in India. They are concentrated in the centre of the country, largely in Madhya Pradesh. Gond art has its origins in the festivals where women painted the main doors and walls of their houses using home-made natural colours, often with a red clay and cow dung base and a white rice powder paste. The predominant theme is veneration of nature and the symbiotic relationship between birds and snakes and beasts and trees, as well as man’s relationship with nature. The inherent belief that viewing a good image begets good luck is the reason homes are adorned with Gond art. Nowadays, painters are being encouraged to work on paper and canvas and are using materials such as acrylic paints for their art. Their paintings have received worldwide exposure and acclaim and adorn the walls and ceilings of prominent institutions in Bhopal.

At BARO, we keep the work of accomplished Gond artist Ramesh Tekam. Ramesh lives and works close to Bhopal and has adapted the traditional mud painting to working on paper and canvas with acrylic paints. 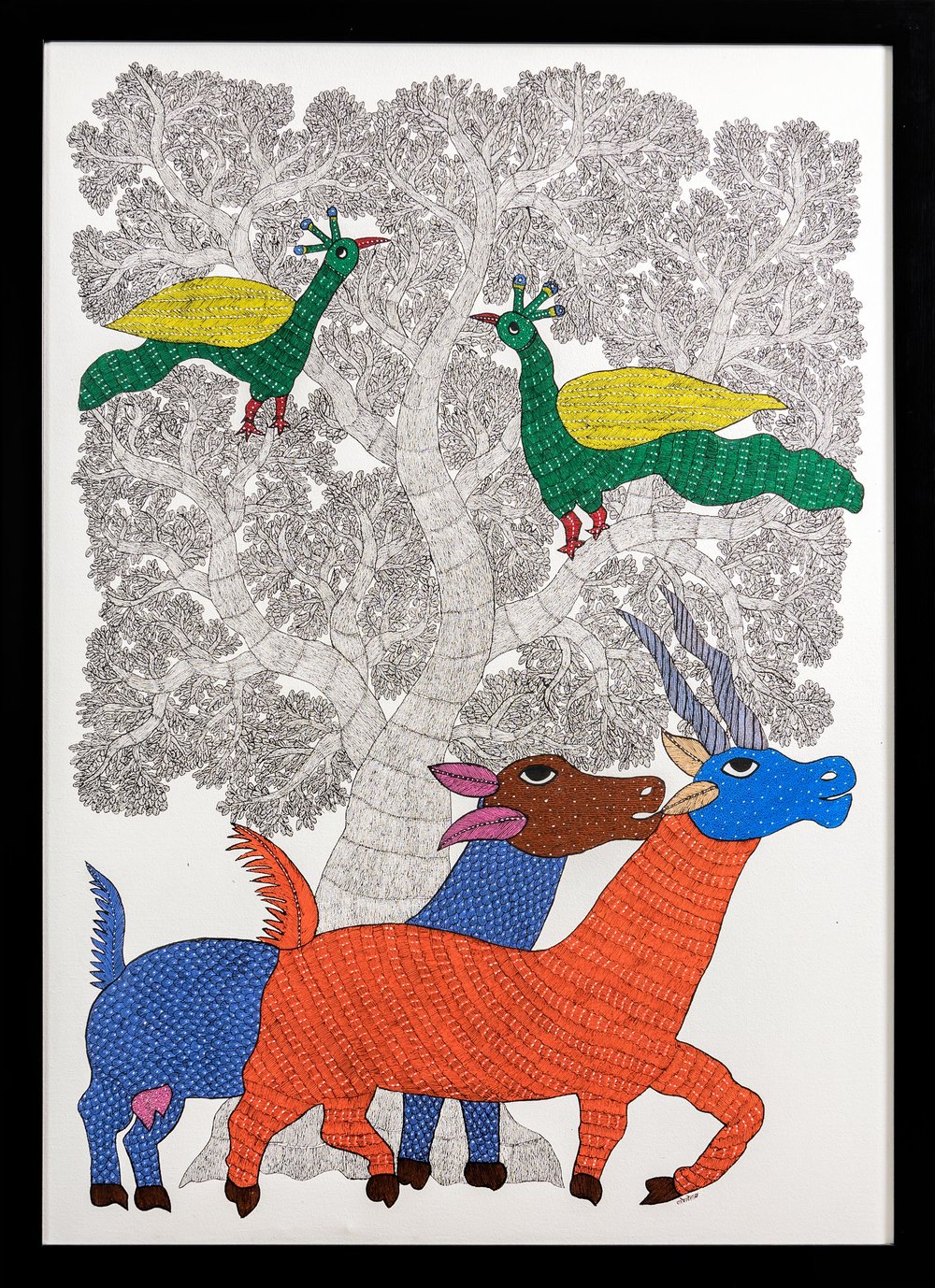 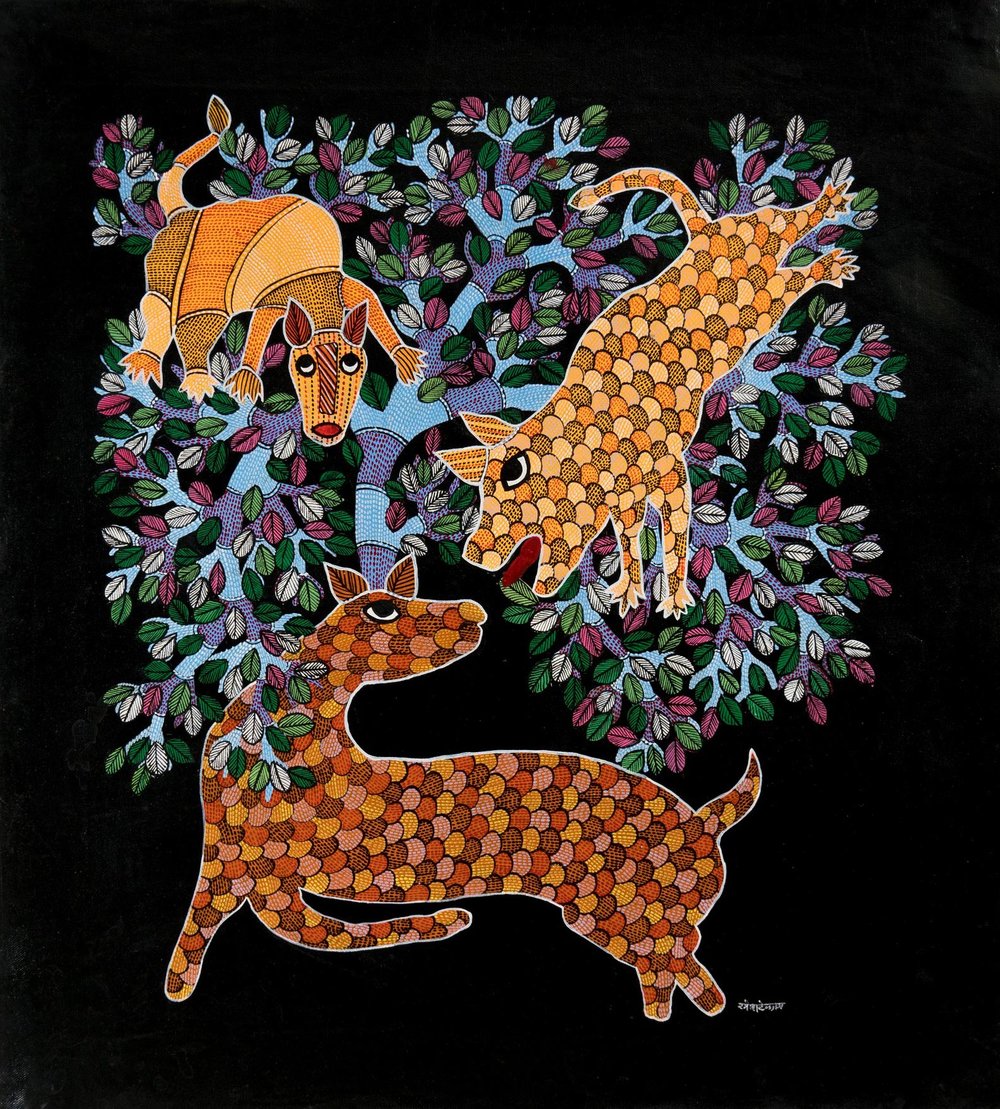 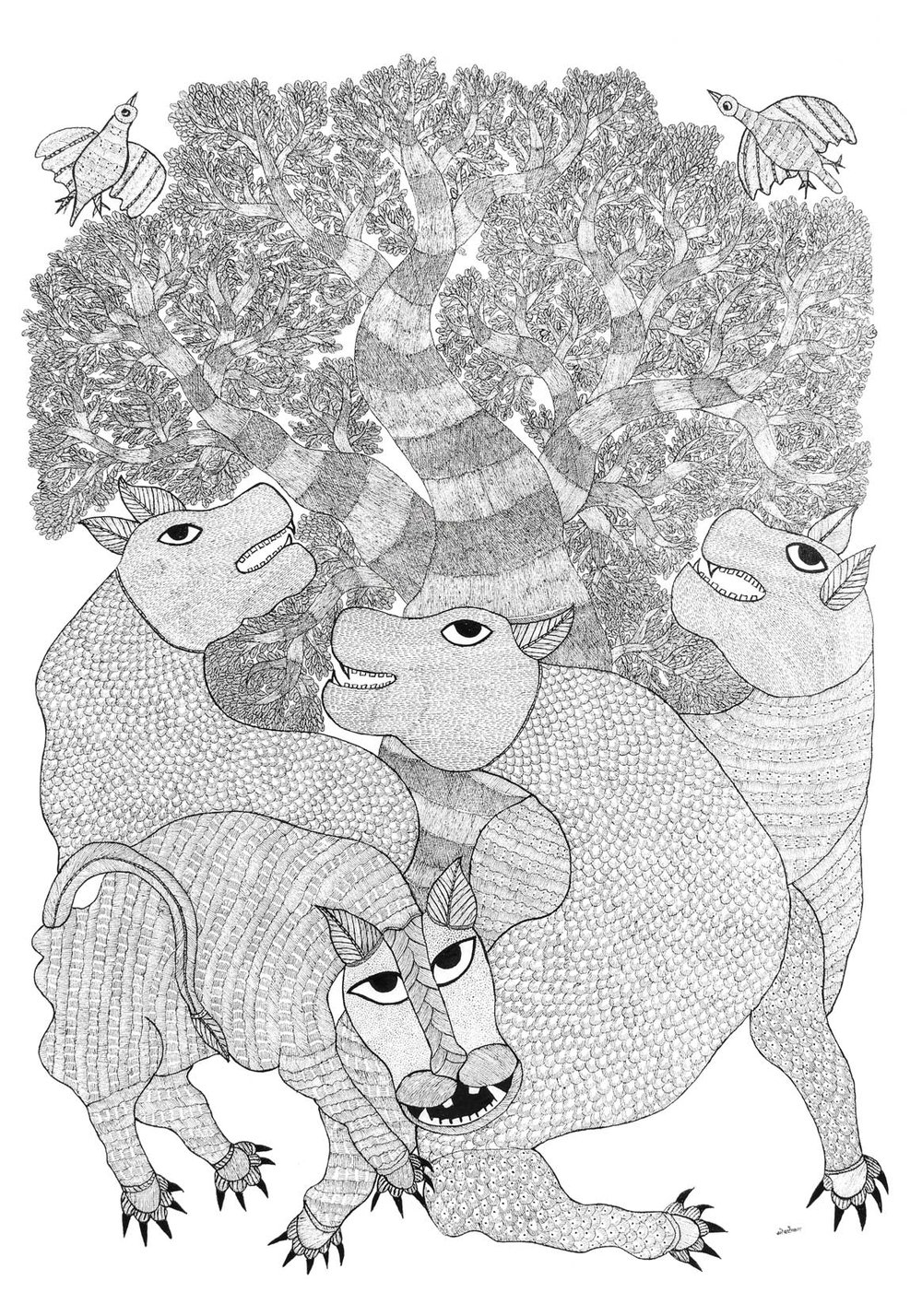 PATTACHITRA SCROLLS
Traditionally, the Patuas of rural Bengal were both professional artists as well as accomplished singers who traveled from village to village with their hand painted scrolls. The paintings were of myths, legends, news and mythology, and as they rolled out the long scrolls, they sang out the stories. They were the “wandering minstrels’  of Bengal. These scrolls were all vertical, between 1 and 2 feet wide and up to 25 feet long, painted on cloth or paper with vegetable colours. Today, they are celebrated as works of art, normally on paper backed with cloth from old saris, and often adapted in size to fit modern homes.

KALIGHAT PICTURES
These are watercolours and contemporary versions of the 19th century art of that name that drew on several influences : urban Calcutta, Western art, the introduction of oleography, lithography and photography, and Raja Ravi Verma’s depiction of women. They are all delightful pictures of gentleman and ladies in 19th century Calcutta and the curious mix of cultures in their daily lives.

SANTHAL ART
The Santhals are one of the largest tribes in India, spread across most of the Eastern states. Their art depicts their village life that is regulated according to ancient custom and shows much of the music and dance for which they are well known.

At BARO, the Bengal Art comes from Medinipur from the family of Laltu Chitrakar. The Santhal work in monochromatic colours is specially done by Togor Chitrakar. 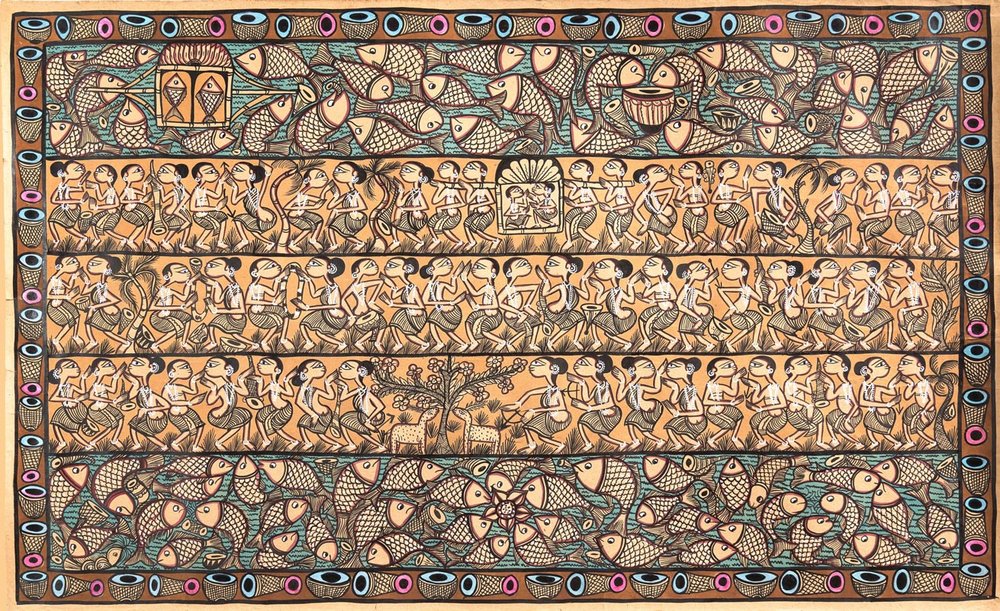 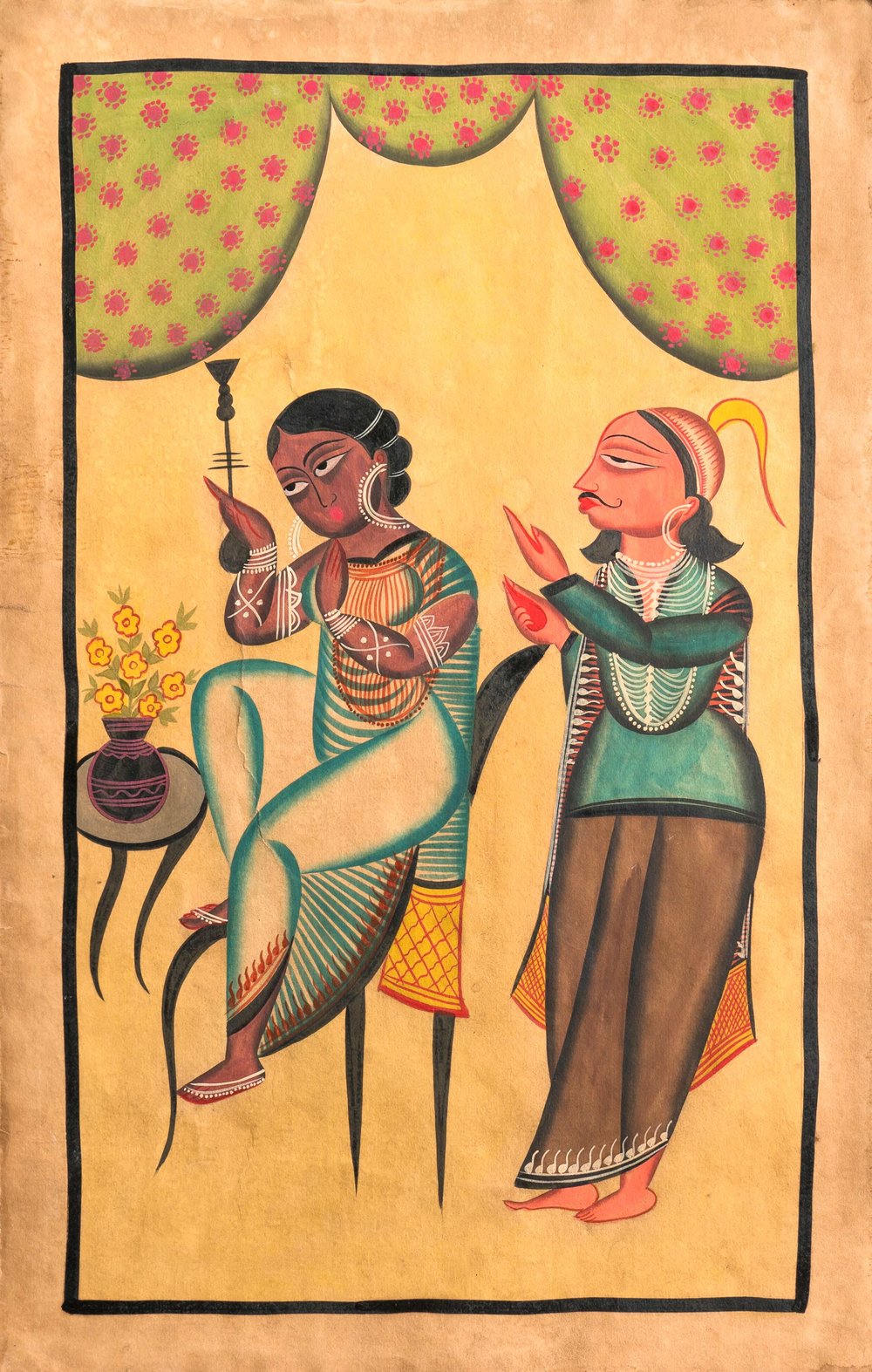 At the shrine of Shrinathji in Nathdwada near Udaipur, where the focus was on service to Lord Krishna as a means of achieving grace, large cloths with vivid depictions of Krishna’s life were hung behind the idol – hence “pichwai”, literally meaning at the back. They were an effective backdrop for the idol as well as an expression of the mood of the deity, the spirit of the season or the theme of the festival. The colours come from various stones that are ground to make pigments, including gold and silver. The pictures range from the lotus ponds and shady groves of Vrindavan for summer, the stormy rain, lightening and dancing peacocks for monsoon, the great Raaslila (circular dance) and the ever popular gai (cows) and Gopis (milkmaidens).

At BARO, our pichwais are from the house of Narendrasingh and his sons, who live and work in Udaipur.

Mata ni Pachedi literally means “behind the mother goddess”, and is a shrine cloth that constitutes a temple of the goddess. When people of the nomadic Vaghari community of Gujarat were barred from entering temples, they made their own shrines with depictions of the Mother Goddess on cloth. This is believed to be the origin of Mata ni Pachedi, the exquisite sacred art. A traditional Mata ni Pachedi comprises of 3 colours: blood red, representing the colour of the earth, black, to ward off evil, and white, which stands for purity. Gradually other colors from nature started adding to the color palette without having any religious significance behind them. As time went by, the community got introduced to pigment dyes which had begun arriving in Gujarat for a fledging textile industry. Exposure to a wider palette meant a riot of color and shade in the Pachedi. The central feature of the cloth is invariably the commanding presence of the mother goddess who is believed to have a hundred forms and is consequently depicted in each of these along with the appropriate iconographic details and attributes. They are essentially an expression of the divine cosmic energy of the mother goddess and the unified manifestation of the creative and destructive principles in her person. The pachedi is used as a canopy that forms a shrine, or is spread over altars or worn by the shaman while worshipping or in a trance. The process of creating a Mata ni Pachedi is laborious and the work is incredibly complex – as a result, a single Pachedi can take an artist many months to make

At BARO, we keep the work of Sanjay Chitara, from a long line of accomplished artists. Sanjay has added a lot of colours to his palette and has adapred designs that are more suited to city homes. Sanjay has liberated the traditional format while retaining the pachedi's ritualistic significance. He paints the whole cloth using the kalam, which makes his work extremely intricate and elaborate. He barely uses the block print, except to form the border. He has also incorporated several elements that were not a part of the traditional pachedi. For example, the tree of life. Pattachitra, or painting on cloth, is one of the most well known forms of traditional painting in Orissa : “patta” is canvas and “chitra” is picture in Sanskrit. The paintings always have religious themes but the most popular is Jagannath. Traditional pattachitra is done on handmade canvas – cloth is bonded with gum made from tamarind seeds, sun dried and then burnished with a smooth pebble; colours and extracted from rocks, shells and minerals.

The pattachitras at BARO come from a group of artists lead and founded by the award winning Pranab Narayan Das. He has pioneered working on tussar silk and using a fine brush made with the hair from a rat’s tail. Colours are all traditional as are the subjects; the work looks finer, more detailed and very impressive. 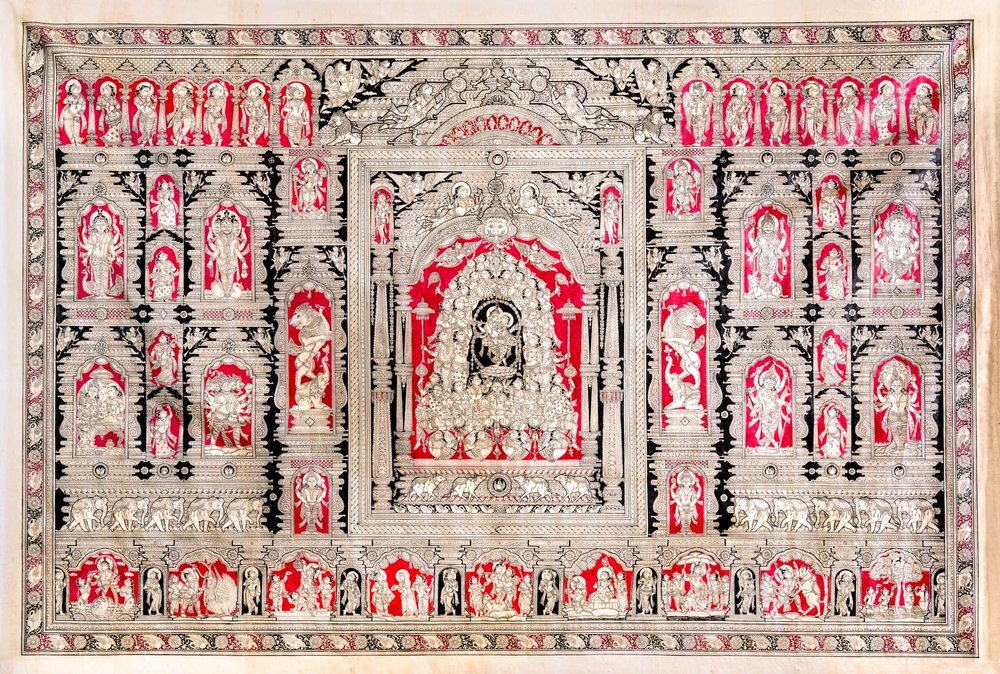 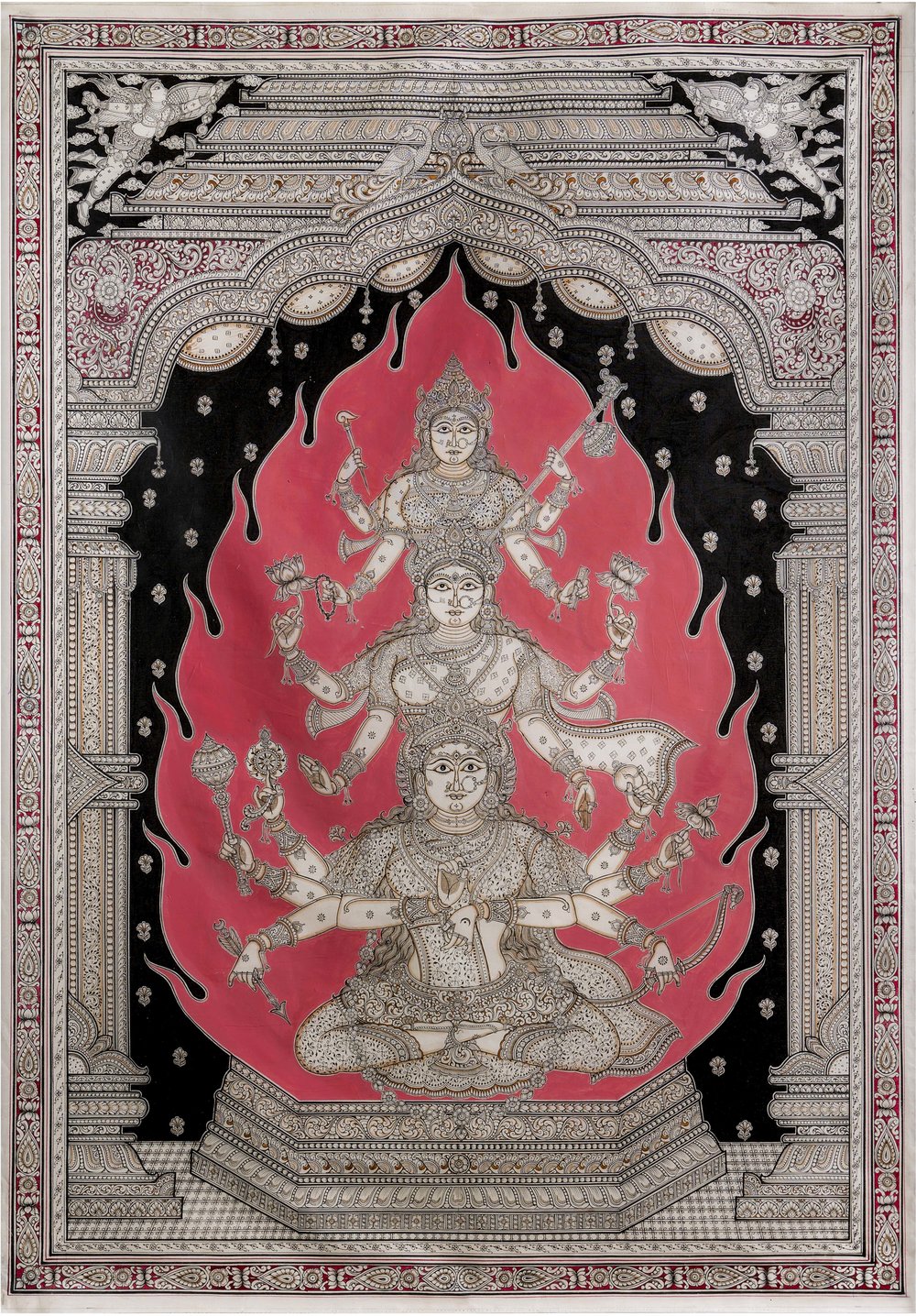 Pabuji and Dev Narayan, medieval Rajput heroes from western Rajasthan, are widely worshipped throughout the state as folk deities. Mainly through night-long narration of their deeds by the wandering priest Bards : the Bhopas. The backdrops for these performances are the phads, painted narrative scrolls that act as portable temples and pictorial aids to the story.

The Phad is painted in squares, each a part of the story. As the Bhopa sings and mimes,  an assistant behind unscrolls a portion of the Phad to point out the relevant part. Traditionally, a phad is 30ft long and 5ft wide, on canvas, in bright colours derived from minerals and stone. It is treated with the utmost reverence from the minute it starts getting created and is worshipped until is threadbare, when it gets “decommissioned” of its holy powers by being consigned into holy waters. Until then, it is an heirloom passed on through generations.

At BARO, we have the work of Kalyan Joshi, the son of one of the Masters who set up a school to spread this art, and himself a Master.

A Shadow Box is like a personal shrine, a multilayered collage of treasured and meaningful images set in an artistic assemblage. These boxes are like a little story world in themselves, intriguing, playful and magical. Its also a form of memory keeping, a way to explore personal history through art that derives heavily from personal mythologies and dreamlike imagery.

The Girl of Balance is a modern day alchemist who is surrounded by creation water, nurturing calm amidst cyclical churning, her mind is centered, as she works with polarity of the sun and the moon and the push and pull of the planets to reach a place of perfection.

The Girl of Twinbeliefs is a totem goddess who's self is divided into this of the ground and that of the sky. Combining sameness and difference, past and present, she mediates between human and spirit. She is a restorer of singularity, revealing answers through dreams and visions,making things and people whole. BIRDS ON A WIRE BY DEVIKA SWARUP